The Kingdom of the Zulu

Throw in the wildlife, the Big 5 and rare marine species, the historic intrigue of the Battlefields, fabulous hiking opportunities, and the sand, sea and surf of coastal resort towns, and you get a tantalising taste of local heritage and authentic African highlights that should be on every ‘must-do’ list. 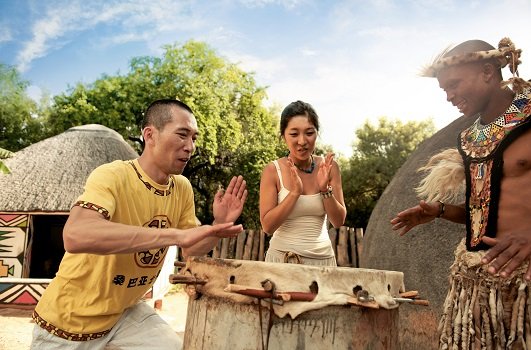 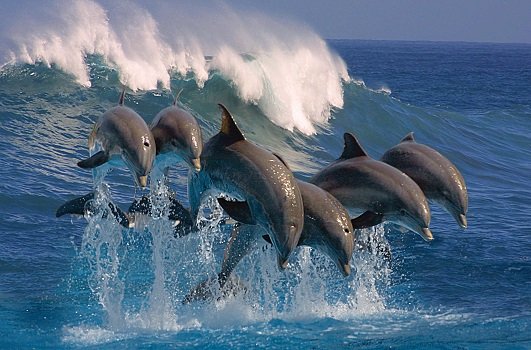 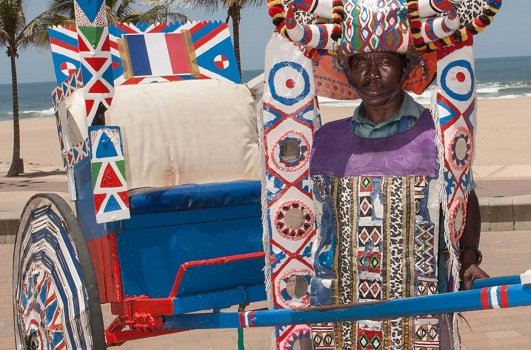 Have fun in the sunny warm weather, whether its surfing, snorkelling, swimming or Dolphin watching, choose from a wide variety of beach activities on offer appealing to the whole family in KZN’s coastline stretching over 500 km.

Escape city life and be one with nature, experience close encounters with the Big 5 and other species in KZN.

For those adrenaline junkies who like to live on the edge, there is ziplining, a bungee swing, white water rafting and more.

Battlefields – The Anglo Zulu War of 1879

With 82 battlefields, museums, old fortifications and places of remembrance the route boasts the largest concentration of significant battles and war related sites than anywhere in South Africa.

Fugitives’ Drift has become world-renowned for its battlefield tours to all the Zulu War battle sites in the region, particularly the battles of Isandlwana and Rorke’s Drift.

Learn of the bravery and mobility of the Zulu Army that defeated the British Army at the Battle of Isandlwana and listen at sunset to the famous story of Rorke’s Drift, where 139 British soldiers were attacked by 4000 Zulu warriors; a British victory which saw the award of more Victoria Crosses than in any other battle in history.

The region is most visited for its many traditional Zulu villages or ‘Living Museums’, where you can learn about Zulu history, local cuisine and the legendary King Shaka. There are also many lovely, eccentric small villages such as Eshowe which has a canopy boardwalk through the Dlinza Forest and the excellent art and craft centre at Fort Nonqayi. In the little coastal town of Mtunzini, wander through one of the last remaining protected stands of Raffia Palms and possibly spot a rare Palm Nut Vulture.

Created as a set for the telemovie Shaka Zulu, the slightly Disney-fied Shakaland beats up a touristy blend of perma-grin performance and informative authenticity. The Nandi Experience (Nandi was Shaka’s mother) is a display of Zulu culture and customs (including lunch), the Zulu dance performance is said to be the best in the country. You can also stay overnight in luxury beehives at the four-star hotel.

Its estuary has one of the highest concentrations of Hippos and Crocodiles in Southern Africa. What also makes this area magnificent is that the park is South Africa’s first World Heritage Site and includes nine percent of the country’s coastline. Be sure to have your camera ready – not just for the beautiful beaches, lush coastal forests, dunes, savannas, wetlands, sunsets over the lake or even the Leatherback Turtles laying eggs (in Summer) – but also the extensive game and birdlife and fascinating scenery.

Durban is about beaches, the promenade, markets and palm trees, with a mix of colonial, Indian and Zulu cultures. The sea is so warm here that surfers go out in boardshorts. Durbs, as the locals call it, is the main city of KZN and a choice winter destination as the weather and beaches remain outstanding for swimming, surfing and all water sports. Cycle or rollerblade along the beachfront’s Golden Mile promenade, lined with big hotels, pools, and cafes.

Sunshine, sea, and sand… the classic summer holiday trio, only here you get it all year round. The subtropical coastline follows the Indian Ocean from just north of Durban all the way up to Richard’s Bay. Come here for swimming, diving, Dolphins, surf and Turtles. Smaller coastal roads, lead to charming seaside villages, where families can enjoy many outdoor activities. A large Indian community settled here long ago, bringing spice markets and tasty Indian cuisine.

Umhlanga, with its red and white lighthouse and lovely stretch of sand, has long been a favourite resort among locals and international visitors. Due to this favoured status, it has a proliferation of high-rise luxury apartment blocks, luxury hotels and a roaring social life for most of the year.

The long-fingered palm trees and almost constant sunshine of Kwa-Zulu Natal’s South Coast begin at Amanzimtoti, just south of Durban, and stretch to Port Edward. The safe, sheltered bays are great for swimming with kids and many beaches have been awarded Blue Flag Status.

If you visit in June, don’t miss the tremendous spectacle of the Sardine Run. You’ll witness thousands of Dolphins, Sharks and Fur Seals, game fish and even possibly a Whale or two, all rushing to feed on a shoal of millions of Sardines.

The Midlands Meander in the heart of Kwa-Zulu Natal, is a collection of arranged routes that offer visitors hospitality in truly beautiful surroundings, outstanding accommodation, conference facilities, fascinating local events, fabulous cuisine and restaurants, revitalising outdoor activities and over-the-top adventure sports, historic landmarks, wildlife conservation, and best of all “shop-till-you-drop” unique arts and crafts. With an easy one-hour drive from Durban there is much to explore and do in the Midlands. And once you have finished meandering there is easy access to the Kwa-Zulu Natal battlefields, the Drakensberg, the coast and the game reserves up the Dolphin Coast.

“The Berg” is divided into roughly five regions with many small towns in the foothills; Bergville and the Northern Drakensberg, Winterton and the Central Drakensberg, Himeville, Underberg and the Southern Drakensberg and then East Griqualand and uMzimkhulu. The Drakensberg is big and beautiful and offers an enormous diversity of attractions and activities. Enjoy mountain biking, horse riding, trout fishing and much more! Explore a wealth of San Rock Art, as well as the local arts and crafts. You won’t find better countryside anywhere!

Home of the Amakhosi and Mkuze Falls Lodges, luxury accommodation venues located in the north of KwaZulu-Natal. This game park is approximately 12,000 ha and comprises a variety of ecosystems which include open savannah, bushveld and wetlands with the Mkuze River flowing through the property. This excellent game reserve is home to the Big 5, although leopard is rarely sighted. Cheetah are regularly seen along with a variety of antelope, giraffe and zebra. The birdlife is particularly diverse.

Set in the heart of Zululand, the oldest game reserve in Africa where Zulu Kings such as Dingiswayo and Shaka hunted and put in place the first conservation laws, where today the Big 5 stalk the verdant savannah. The park became world renowned for its White Rhino conservation. Apart from game-viewing drives, there are two self-guided auto trails which provide information on both the management and natural history of the reserve. Guided walks are also available, particularly rewarding in the early morning and late afternoon.

Located within the Msunduzi Valley, is home to the Big 5. There are several private lodges within the reserve, including Leopard Mountain Lodge, Mavela Game Lodge and Rhino River Lodge. These lodges offer guided open vehicle game drives, visits to animal hides and watering holes and guided bush walks which are undertaken with experienced and knowledgeable rangers. The reserve is one of the few areas selected for the re-introduction of the rare and endangered Black Rhino.

Set within easy reach of the Indian Ocean coastline and the famous iSimangaliso/Greater St Lucia Wetland Park in northern Kwa-Zulu Natal, &Beyond Phinda Private Game Reserve is known for its abundant wildlife, diversity of habitats and wide range of safari activities. Thanks to its coastal rainfall pattern, &Beyond Phinda Private Game Reserve enjoys a lush green environment that contains seven distinct ecosystems. &Beyond Phinda is often referred to as ‘Seven Worlds of Wonder.’ This fascinating variety of landscape and vegetation shelters an abundance of wildlife, including not only the Big 5 but many rarer and less easily spotted species, such as the elusive Cheetah or the endangered Black Rhino.

Thanda offers an authentically South African wildlife experience, matched with sincere commitment to the Zulu culture and passionate conservation of the environment. Meaning ‘love’ in isiZulu, Thanda is a proud member of The Leading Hotels of the World and multiple winner of World’s Leading Luxury Lodge. It is known for meaningful safari experiences and exclusive close-up encounters with Africa’s magnificent Big 5.

Situated east of Ladysmith and less than an hour’s drive from the Drakensberg, Nambiti is the only malaria-free game reserve in the area with the Big 5 and currently has over 40 other species of game including Cheetah, Giraffe, Hippo, Hyena, Impala, Eland and Zebra. There are nine luxurious game lodges, including six 5-star game lodges and two magnificent elevated tented camps, with facilities ranging from self-catering to the pampered.